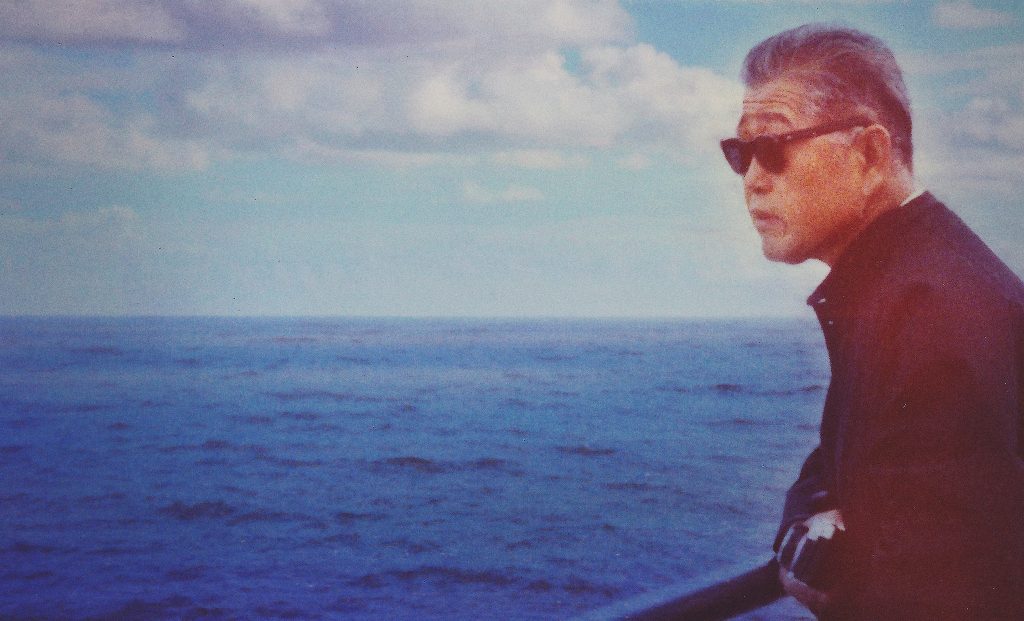 In 95 AND 6 TO GO, a resilient widower’s memories become intertwined with the fictional screenplay his granddaughter is writing, revealing the fine line between life and art, rumination and imagination.

Filmmaker Kimi Takesue captures the cadence of daily life for Grandpa Tom, a retired postal worker born to Japanese immigrants to Hawai’i in the 1910’s. Amidst the solitude of his home routines – coupon clipping, rigging an improvised barbecue, lighting firecrackers on the New Year – we glimpse an unexpectedly rich inner life. As his granddaughter queries his history of love and loss, a stalled film project becomes a collaborative inquiry into mortality and how one constructs a personal narrative with memories that span almost a century.

Shot over six years in Honolulu, this intimate meditation on absence and family expands the vernacular of the “home movie” to consider how history is accumulated in the everyday and how sparks of humor and creativity can animate an ordinary life.

“…a glorious film. Shot over six years in Honolulu, the irreversible passage of time remains a motif on the fringes of its images. Takesue’s film is a personal ‘home movie’ of the rare kind.” – CPH:DOX

“The film is in many ways a mutually sombre homecoming; the proverbial return to care for one’s elders becomes an active accounting of the past and provokes an unforeseen source of humble creativity.” – CinemaScope

“95 and 6 to Go is that rarity: a film that makes you want to be better, do better. Be aware of mortality approaching so that you can be present to the experiences of those further down the path than you are.” – RogerEbert.com Kimi Takesue (Director, Producer, Cinematographer, Editor) is an award-winning filmmaker and the recipient of the John Simon Guggenheim Fellowship in Film. Other honors include a Rockefeller Media Arts Fellowship, two artist fellowships from NYFA, a Kodak Cinematography Fellowship, a CAAM Fellowship (Center for Asian American Media), and grants from the ITVS, Ford Foundation, Pennsylvania Council on the Arts, NYSCA, The Arts Council of England and artist fellowships at Yaddo and the MacDowell Colony.

Takesue’s critically acclaimed Ugandan feature-length documentary WHERE ARE YOU TAKING ME? was commissioned by the International Film Festival Rotterdam and premiered at the festival, followed by screenings at the Museum of Modern Art (NYC), the LA Film Festival, and festivals in Sweden, Switzerland, Italy, Uganda, Poland, Portugal and India, among others. WHERE ARE YOU TAKING ME? was theatrically released by Icaus Films, was a Critics’ Pick by Time Out-New York and LA Weekly and was described by Varietyas, “Beautifully meditative…an uplifting observational documentary that plays on seeing and being seen.”

Takesue’s films are distributed by Women Make Movies and Icarus Films. She is Associate Professor in the Department of Arts, Culture, and Media at Rutgers University-Newark.

From 2015 to 2017, Lynne visited with Carolee Schneemann, Barbara Hammer and Gunvor Nelson, three multi-faceted artists who have embraced the moving image throughout their lives. From Carolee’s 18th Century house in the woods of Upstate New York to Barbara’s West Village studio to Gunvor’s childhood village in Sweden, Lynne shoots film with each woman in the place where she finds grounding and spark.