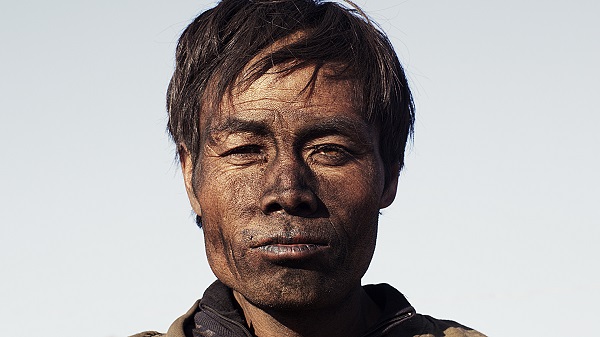 This screening is co-presented with Crows & Sparrows and co-sponsored by the Harvard-China Project on Energy, Economy and Environment and the Environment in Asia Series, Fairbank Center for Chinese Studies.

Director Zhao Liang will attend via Skype for discussion with Gen Carmel, LEF Program Officer and curator for Crows & Sparrows.

Beginning with a mining explosion in Inner Mongolia and ending in a ghost city west of Beijing, political documentarian Zhao Liang’s visionary new film Behemoth details, in one breath taking sequence after another, the social and environmental devastation behind an economic miracle that may yet prove illusory.

Drawing inspiration from The Divine Comedy, Zhao offers intoxicating and terrifying images of the ravages wrought by his country’s coal and iron industries on both the land and its people. Beautiful grasslands covered in soot and dust. Mountains shredded in half. Herdsmen and their families forced to leave their lands, to escape poisonous air. Miners descending deeper into pitch black mine shafts. Scorching ironworks that resemble hellish infernos. And in hospitals, ill-equipped to handle the deluge, workers suffering critical illnesses.

Building upon his previous acclaimed exposés (2009’s Petition, 2007’s Crime and Punishment), Zhao combines muck-racking journalistic techniques with stunning visuals to capture an unfolding nightmare. It’s a film replete with haunting imagery. But none more so than Zhao’s tour through a barren metropolis, a gleaming, newly constructed city, intended as a workers’ paradise, that now stands empty, desolate of life; waiting, perhaps, for that economic miracle.

Born in Northeastern China (Dandong, Liaoning Province), Zhao Liang graduated from Luxun Academy of Fine Arts in 1992. Based in Beijing since 1993, Zhao has been working as an independent documentary filmmaker as well as a multimedia artist in photography and video art. His works have been exhibited in the International Center of Photography (New York), Walker Art Center (Minneapolis), Haus der Kulturen der Welt (Berlin), Museo Reina So a (Madrid) and numerous other art galleries and museums around the world.

With his unique vision and acute reflections on social issues and conditions, Zhao has been extending the frontiers of documentary filmmaking in China today. His award-winning Crime and Punishment (Best Film – Festival des 3 Continents – Nantes, France; also screened in Locarno) was an eye-opening exploration of military law enforcement in China. His Petition (aka The Court of the Complaints) followed a group of disgruntled citizens from 1996 to 2008, and was screened at the Cannes Film Festival (Special Screenings). The film has won several awards at festivals, including Hong Kong, DocLisboa, Hawaii, DocNZ Auckland and Tiburon. His documentary Together revealed the situation of HIV and AIDS in China, and was screened at the Berlinale Panorama.

Prior to the feature, The DocYard presents THE TURNER DIARIES: A CALL TO ACTION (8 min, 2017, digital video), directed by local filmmaker Eric Gulliver for American Experience. PBS’s flagship history series American Experience examines the infamous publication The Turner Diaries; a dangerous book with a unique legacy of directly inspiring acts of terror and violence since its publication in the late 70s.