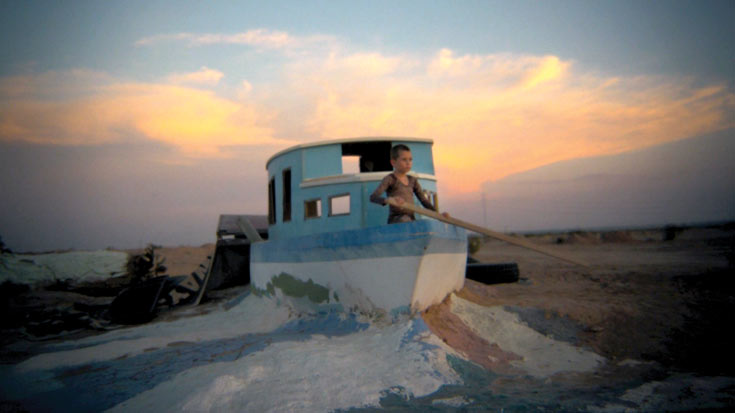 The rusting relic of a failed 1950s development boom, the Salton Sea is a barren Californian landscape often seen as a symbol of the failure of the American Dream. A sea in the middle of the Colorado desert.

True to her roots as a photographer, video artist, and music video director, Alma Har’el crafts an adamantly atypical and artistically innovative film telling the story of of three protagonists: Benny Parrish, a young boy diagnosed with bipolar disorder whose troubled soul and vivid imagination create both suffering and joy for him and his complex and loving family. CeeJay Thompson, a black teenager and aspiring football player who has taken refuge in Bombay Beach hoping to avoid the same fate of his cousin who was murdered by a gang of youths in Los Angeles. And that of Red, an ancient survivor, once an oil field worker, living on the fumes of whiskey, cigarettes and an irrepressible love of life.

Together they make up a triptych of American manhood in its decisive moments, populating the Salton Sea’s land of thwarted opportunity.

Bombay Beach is a dreamlike poem that sets these personal stories to a stylized melding of observational documentary and choreographed dance, to music specially composed for the film by ZACH CONDON of the band BEIRUT, and songs by BOB DYLAN. The result is a moving and madly inventive documentary experience—an evocative, symbolic portrait of rural America and its inhabitants.