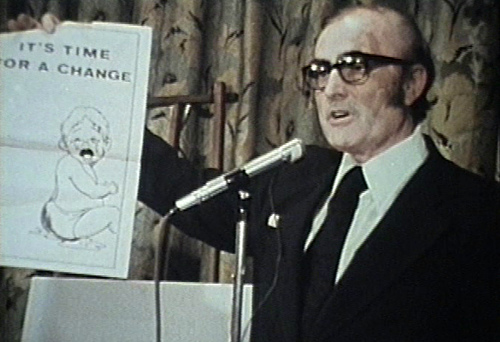 Synopsis: The once thriving industrial town of Haverhill, Massachusetts on the Merrimack River now resembles, in the words of one of the film’s subjects, “a ghost town where you expect to see tumbleweeds come rolling down Main Street.” This film examines a dying industrial town and its politicians’ search for votes over such issues as municipal spending, rising taxes, the revitalization of depressed areas, and attracting new industry.

The film’s central event is the 1976 Mayoral election. Election scenes are intercut with comments from Haverhill residents, members of a local foundation, political scientist Frances Fox Piven, the president of the local union, and the shoe manufacturers themselves. The oral history which surrounds the election footage is a reservoir of information about Haverhill’s present condition as well as its past.

Prior to the feature we will screen REMEMBERING JOHN MARSHALL, a short film by DER Executive Director, Alice Apley and filmmaker David Tames. (2006 / 16min)

A portrait of  filmmaker and activist John Kennedy Marshall who began his career in the 1950s documenting the lives of the Ju/’hoansi people of Namibia – among the last remaining hunter-gatherers – for anthropological audiences. In the 1980s Marshall became an activist helping the Ju/’hoansi fight for land and water rights. He made important contributions to cinéma vérité filmmaking and leaves behind an extensive ethnographic film archive including over 20 films on the Ju’/hoansi. Features interviews with Elizabeth Marshall Thomas, Robert Gordon, Alexandra Eliot Marshall, Cynthia Close, Sandeep Ray, Karma Foley, Jayasinhji Jhala, and Rakhi Jhala.

Sue Cabezas is Executive Vice-President of Applewood Books, “Publishers of America’s Living Past,” in Carlisle, MA. She was formerly the Executive Director and Treasurer of Documentary Educational Resources, and serves on the Board of Directors of both Applewood Books and DER, where she now serves as the Chairperson of the Board. Sue also served as President and member of the Board of Directors for Women in Film and Video’s New England Chapter. Sue started her tenure at DER in 1974 where she worked side by side with cofounders John Marshall and Timothy Asch for 19 years.

These films will be preceded by an audio short from the collection of the Third Coast International Audio Festival.  Based in Chicago, the Third Coast International Audio Festival (TCIAF) curates sound-rich audio stories from around the world and shares them with as many ears as possible – on the radio, on the Internet, and at public listening events all over the place.