OJ: Made in America 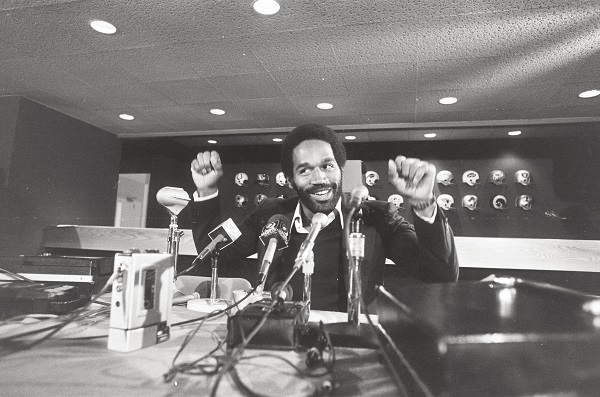 HOW TO WATCH: We’ve made it easy to choose when you’d like to watch…

Marathon the entire film on Monday: You can choose to watch the entire film during a three-part marathon viewing session (with periodic breaks) on Monday January 30, followed by Q&A with the director.

Watch over Saturday/Sunday/Monday: Alternatively, you can choose to watch any or all three parts of the film over three days on Saturday January 28, Sunday January 29, and Monday January 30, followed by Q&A with the director.

Co-presented with the Roxbury International Film Festival, the UMB Film Series and the Non-Fiction Cartel.

Ticket Pricing: Price per screening segment is $12 ($10 for students). Special ticket price of $25 to attend all three parts, for those interested in seeing the film in its entirety. DocYard passholders can attend all 3 screening segments as part of their season pass. Buy tickets.

It is the defining cultural tale of modern America – a saga of race, celebrity, media, violence, and the criminal justice system. And two decades after its unforgettable climax, it continues to fascinate, polarize, and even, yes, develop new chapters. Now, the producers of ESPN’s award-winning “30 for 30” have made it the subject of their first documentary-event and most ambitious project yet. From Peabody and Emmy-award winning director Ezra Edelman, it’s “O.J.: Made in America”.

“O.J.” revisits – and redefines – it all. The domestic abuse. The police investigation. The white Bronco chase. The trial of the century. The motive, the blood, the glove. The verdict. The aftermath. Drawing upon more than seventy interviews- from longtime friends and colleagues of Simpson to the recognizable protagonists of the murder investigation to observers and commentators with distinct connections to the story – the docu-event is an engrossing, compelling, and unforgettable look at a tantalizing saga. Because at the end of what seems like a search for the real truth about O.J. Simpson, what’s revealed just as powerfully is a collection of indelible, unshakeable, and haunting truths about America, and about ourselves.

“For its part, ‘O.J.: Made in America,’ directed by Ezra Edelman, has the grandeur and authority of the best long-form nonfiction. If it were a book, it could sit on the shelf alongside ‘The Executioner’s Song’ by Norman Mailer and the great biographical works of Robert Caro.” – AO Scott / NY TIMES

Ezra Edelman is an award-winning filmmaker. In 2014, he directed two films, Requiem for the Big East and The Opposition, which aired as part of ESPN’s acclaimed 30-for-30 documentary series.

In 2013, Edelman co-produced the documentary Cutie and The Boxer, which was nominated for Academy Award.

He also has produced and directed three films for HBO, including Magic and Bird: A Courtship of Rivals, which received a Peabody Award and was nominated for three Emmys. He produced and directed, Brooklyn Dodgers: The Ghosts of Flatbush, which won an Emmy and The Curious Case of Curt Flood.

Before beginning work in documentaries, Edelman spent seven years as a producer on the news magazine show, Real Sports w/Bryant Gumbel, during which time he won four Emmys.

A native of Washington D.C., Ezra graduated from Yale University and currently lives in Brooklyn.

Screening with the 1pm program on January 28 and the 7pm program on January 30, the DocYard will present the short film GOOD WHITE PEOPLE by Jarrod Welling-Cann and Erick Stoll. The film won the Camden Cartel Award for Best Short at the 2016 Camden International Film Festival, an award given by the local documentary filmmaking collective The Non-Fiction Cartel.

Film Description: In the Spring of 2001, the African-American community of Over-the-Rhine in downtown Cincinnati arose in protest after unarmed 19-year-old, Timothy Thomas, was killed by a white officer named Steven Roach. In the years following, in order to allure prospective residents, Over-the-Rhine was swept into a new narrative of safety and whiteness by the creation of an arts-and-brewery district for the creative class. While it’s dangerous and inconvenient Black history is revitalized from existence, property values rise with the presence of police, tax abatements, and zoning amendments to serve and protect those properties.

Filmed during the peak of Over-the-Rhine’s urban renewal, GOOD WHITE PEOPLE follows the story of Reginald Stroud who runs a karate school and candy store in the storefronts beneath the apartment he and his family have called home for over 10 years. When a for-profit developer purchases the building they rent, Reginald and his family are told they must vacate the building and are given only 45 days to find a new home and relocate their businesses while their neighborhood makes way for start-up incubators, yoga studios, and luxury condominiums.

Formerly a target of the policies created by the War On Drugs, Cincinnati’s inner-city is now the target of urban development corporations as its black population declines. GOOD WHITE PEOPLE hopes to start a conversation about the use of coded terminology like urban renewal, revitalization, and urban renaissance, and explore how these words help to trivialize and disguise the commercial practice of white supremacy, neocolonialism, and the economic othering of low-income residents.

Film Description: On the night of November 29th 2012 two black drivers, Melissa Williams and Timothy Russell, were chased by 62 police vehicles for 23 minutes throughout greater Cleveland. It ended with a flurry of bullets fired from 13 police officers’ weapons. Williams and Russell both died on the scene. In a tragic case of collective hysteria and abuse of power the numbers can’t be comprehended, nor the grave injustices ever reconciled.

Part of the “Repurposed Web Reports” Series: A series of  “reports” composed entirely of media collected from the Internet.  Using the web as an investigative archive, these works mine the margins of the public sphere for vicarious insights into the contemporary state of humanity. Each work is prompted by a Google search, with the results creating the parameters of information and research as well as the dynamic media (image and sound) to be used as source material.  Typically the subjects or events are at the margins of Western media representation and the content is often generated by non-professionals – amateurs, tourists, and other on site witnesses using portable personal recording devices (cell phones, flip cams, consumer camcorders) but in some instances it is either mixed with reports from conventional media outlets or originates from them singularly.

Paul Turano is a visual artist whose work in film and video and new media incorporates lyrical observational strategies and meditations on personal space, as well as subjective reportage of marginal media events and long form essay films. It has been presented throughout Europe, Asia, Australia and North America. Recent screenings include the Pirate Cinema screening at the Maldives Pavilion at the Venice Biennale, the New Filmmakers New York , Black Maria Film and Video Festival, Crosstalk Video Art Festival in Budapest, Hungary, L’Alternativa in Barcelona, Spain, Festival des Cinémas Différents et Expérimentaux de Paris, France. Based in Boston, he has screened his work at the Harvard Film Archive, the Institute of Contemporary Art and The Museum of Fine Arts and his films have been programmed in over 60 national and international film festivals.