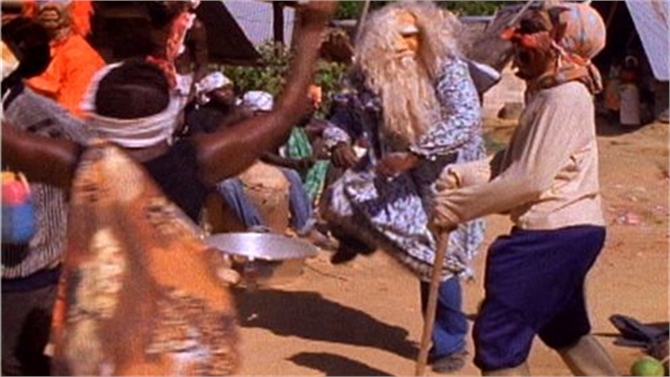 Special co-presentation with the Harvard Film Archive and Balagan Films!

On the second night of our three-night special co-presentation, see a selection of short films from Ben Rivers and Ben Russell, the two friends, artists, and makers of A SPELL TO WARD OFF THE DARKNESS. Having been exhibited all over the world, their short films have been described as primal, otherworldly, ethnographic, and utopian.

Excerpt of I KNOW WHERE I’M GOING:

From the Maroon village of Malobi in Suriname, South America, this single-take film offers a strikingly contemporary take on a Jean Rouch classic. It’s Halloween at the Equator, Andrei Tarkovsky for the jungle set.

Three mythical stories from the Republic of Vanuatu, an island nation located in the South Pacific Ocean, concerning the origin of humans, why pigs walk on all fours, and why a volcano sits where it does.

On the island of Tanna, a part of Vanatu, an archipelago in the Melanesia strange rites are enacted and time passes slowly while the inhabitants await the return of the mysterious John.

A trance dance water implosion, a newer line drawn between secular possession and religious phenomena.  Filmed in one shot at a sacred site on the Upper Suriname River, the minor secrets of a Saramaccan animist everyday are revealed as time itself is undone.  Rites are the new trypps; embodiment is our eternal everything.

A fragmented road trip through Britain on the peripheries. Down empty roads, off in the wilderness, a few lone stragglers. My first stop geologist Jan Zalasiewicz, talking about the Earth in One-hundred millions years time.

Filmmakers Ben Russell and Ben Rivers will attend in person for Q&A moderated by Erin Trahan, film journalist and editor of The Independent.

On March 23, The DocYard, The Harvard Film Archive, and the Balagan Film Series will present A SPELL TO WARD OFF THE DARKNESS by Ben Russell and Ben Rivers, with both directors in attendance for discussion.

Ben Rivers (b. 1972, UK) studied Fine Art at Falmouth School of Art, initially in sculpture before moving into photography and super8 film. After his degree he taught himself 16mm filmmaking and hand-processing. His practice as a filmmaker treads a line between documentary and fiction. Often following and filming people who have in some way separated themselves from society, the raw film footage provides Rivers with a starting point for creating oblique narratives imagining alternative existences in marginal worlds. He is the recipient of numerous prizes including  the FIPRESCI International Critics Prize at the 68th Venice Film Festival for his first feature film “Two Years At Sea”. In 1996 he co-founded Brighton Cinematheque, which he then co-programmed through to its demise in 2006. He continues to programme on a peripatetic basis.