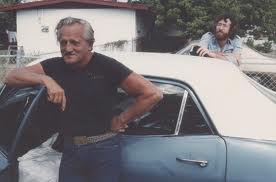 Michel Negroponte and Ross McElwee follow three residents of Cape Canaveral, Florida, several years after the phasing out of Apollo moon missions: a salty newspaper reporter who has witnessed 1,600 consecutive launches; an out-of-work maintenance man who now leads a motorcycle gang; and the owner of a small construction company who sidelines as the clown-host of a local kids television show. Negroponte and McElwee transcend the “God, guns, and family” clichés of small town America in this emotionally complex, novelistic portrait of people living in hard times.  – Museum of Modern Art

Director’s Statement by Ross McElwee:
While I was a graduate student in the filmmaking program at MIT, I had shot one film, Charleen, and was in the process of completing the editing of it, but wanted to begin shooting a second project before I graduated and lost access to camera equipment provided by MIT.  In the Atlantic Monthly I found an article on the American space program, and in it,  a reference to a newspaper reporter named Mary Bubb who lived in Cape Canaveral and, by her own reckoning, had seen 1600 consecutive rocket launches.  There was something about the word “consecutive” that caught my attention – that degree of obsession – and how it might serve as a window on an aspect of American culture in which I had long been interested.  Like millions of kids growing up in the sixties, I was fascinated by NASA, the astronauts, and the entire space program.  I could draw all the rocket models, and to his day can describe the difference between an Atlas and a Jupiter C booster.  But I went even further, organizing a group of neighborhood nerds to create LASA – the Local Aeronautics and Space Administration. Our first rockets were no better than pipe bombs – metal tubing packed with carefully proportioned chemicals ignited by gasoline.  But we soon became more sophisticated, buying prepackaged rockets which were launched electrically from a console we designed ourselves.  We measured the apogee of the rockets with altimeters and later launched scores of insects, amphibians, and even hapless hamsters, some of which actually survived, floating back to earth in capsules attached to parachutes.   It was, quite literally, a blast.
Reading the Atlantic article, this early fascination returned to me, and suddenly, I became fixated on making a film about Cape Canaveral, with Mary Bubb as a way into the community.  I very much wanted to co-direct this film with someone, and so approached my friend and fellow grad student, Michel Negroponte.  Michel signed on, and we left for Cape Canaveral shortly thereafter.  We shot for a total of maybe ten weeks on the Cape, and through Mary met the other people who appear in the film.  We stayed in one of Papa John’s cinderblock apartment units, and wove ourselves into the texture of the community. We had no particular agenda, did no formal interviews, and for the most part just filmed things as they happened around us. For me, it was a full-fledged dive into cinema verite – the last I would attempt. There was much I loved about this style of filmmaking, but ultimately decided I wanted to try something different.  After Space Coast, I began evolving a much more personal, autobiographical approach to my filmmaking.
“Space Coast has the evocative sub-kitsch clutter of an Edward Kienholz tableau or Vernon Zimmerman’s Unholy Rollers.
– Village Voice
“It is a fascinating but completely disconsoling film; the filmmakers portray America with Sartrian pessimism.”
– Het Parool, Amsterdam