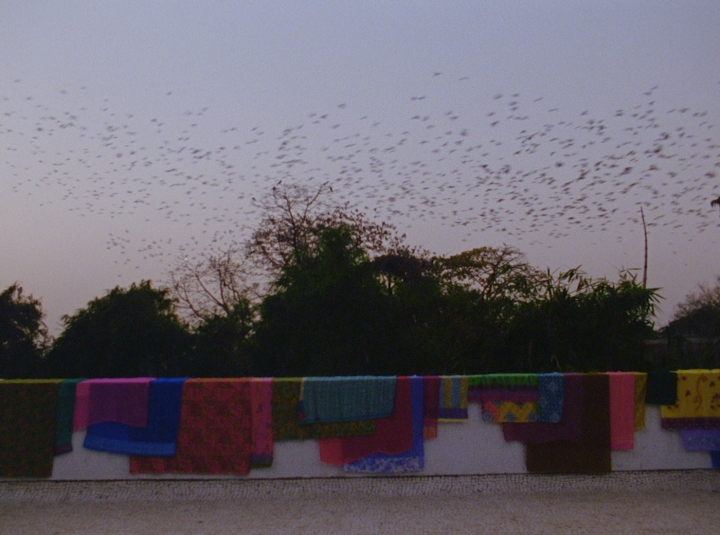 A postcard from an imploded society. Bringing mundane objects to life to interpret place through materials, The Grand Bizarre transcribes an experience of pattern, labor, and alien[-]nation[s]. A pattern parade in pop music pairs figure and landscape to trip through the topologies of codification. Following components, systems, and samples in a collage of textiles, tourism, language, and music, the film investigates recurring motifs and how their metamorphoses function within a global economy.

“In giving primacy to things over people, The Grand Bizarre mounts a radical, object-oriented ethnography, one that encapsulates our present, capitalist epoch from within, showcasing the life of the mind by presenting the world to us all at once.” – Cinema Scope

Jodie Mack is an experimental animator who received her MFA in film, video, and new media from The School of the Art Institute of Chicago in 2007. Combining the formal techniques and structures of abstract/absolute animation with those of cinematic genres, her handmade films use collage to explore the relationship between graphic cinema and storytelling, the tension between form and meaning. Musical documentary or stroboscopic archive: her films study domestic and recycled materials to illuminate the elements shared between fine-art abstraction and mass-produced graphic design. The works unleash the kinetic energy of overlooked and wasted objects and question the role of decoration in daily life.

Prior to the feature screening, The DocYard is excited to present two of Jodie Mack’s recent short films on 16mm!

Hoarders Without Borders 1.0 (2018, 4m45s, 16mm, color, silent) Featuring crystallized magic markers and the kidney stone of a horse, the generously-curated mineral collection of Mary Johnson comes to life in a manual labor of love for the process of archival procedure.

Wasteland No. 1: Ardent, Verdant (2017, 4m30s, 16mm, color, silent)
A eulogy for wasted potential sends the out of date to the out of body: trash to treasure. An appetite for destruction charts the product life cycle, interrupting the horizon through an intersection of perspectives.