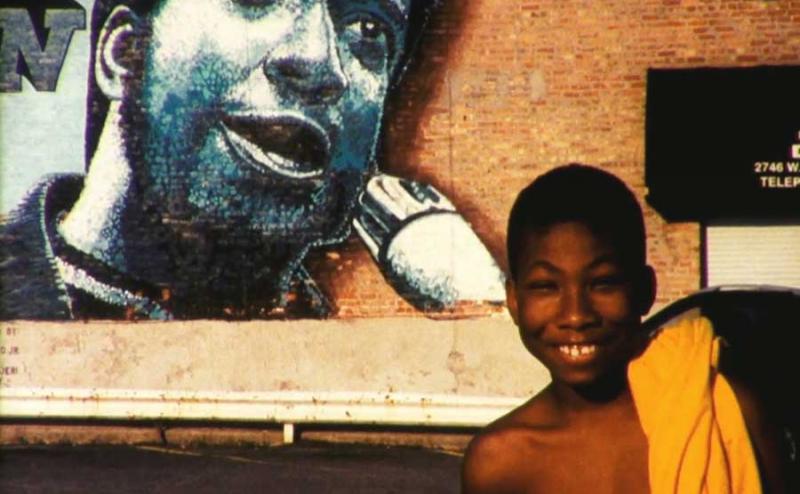 Director Deborah Stratman will attend in person for discussion with Dennis Lim, director of programming at Film Society of Lincoln Center.

An experimental documentary comprised of regional vignettes about faith, force, technology and exodus. Eleven parables relay histories of settlement, removal, technological breakthrough, violence, messianism and resistance, all occurring somewhere in the state of Illinois. The state is a convenient structural ruse, allowing its histories to become allegories that explore how we’re shaped by conviction and ideology.

The film suggests links between technological and religious abstraction, placing them in conversation with governance. Locations are those where the boundaries between the rational and supernatural are tenuous. They are “thin places” where the distance between heaven and earth has collapsed, or more secularly, any place that bears a heavy past, where desire and displacement have lead us into or erased us from the land. What began as a consideration of religious freedom eventually led to sites where belief or invention triggered expulsion. The film utilizes reenactment, archival footage, observational shooting, inter-titles and voiceover to tell its stories and is an extension of previous works in which the director questioned foundational American tenants.

The Parables consider what might constitute a liturgical form. Not a sermon, but a form that questions what morality catalyzes, and what belief might teach us about nationhood. In our desire to explain the unknown, who or what do we end up blaming or endorsing?

Deborah Stratman is a Chicago-based artist and filmmaker interested in landscapes and systems. Much of her work points to the relationships between physical environments and human struggles for power and control that play out on the land. Recent projects have addressed freedom, expansionism, surveillance, sonic warfare, public speech, ghosts, sinkholes, levitation, propagation, orthoptera, raptors, comets and faith. She has exhibited internationally at venues including MoMA NY, Centre Pompidou, Hammer Museum, Mercer Union, Witte de With, the Whitney Biennial and festivals including Sundance, Viennale, CPH/DOX, Oberhausen, Ann Arbor, Full Frame, Rotterdam and Berlinale. Stratman is the recipient of Fulbright, Guggenheim and USA Collins fellowships, a Creative Capital grant and an Alpert Award. She lives in Chicago where she teaches at the University of Illinois.

Prior to this feature screening, the DocYard will present the short film ENOLAEMEVAEL (7 min, 2016, digital video) by local filmmaker Kathryn Ramey.

Film Description: This remake of Man Ray’s celebrated Emak Bakia (1926), which uses a cameraless method of creating hand-processed film images in high-contrast black-and-white, refers to the original film even in its subject matter as well: continuing with the motifs of death, it works with artifacts and documents from US drone attacks on Pakistani territory in 2015.

Kathryn Ramey (1967) is an American filmmaker, anthropologist, and teacher at Emerson College in Boston. Through celluloid manipulation and hand developing film stock, she creates new audiovisual forms that search for points of intersection between anthropological studies and experimental film. Her works have received numerous awards at international festivals.

“Combining experimental process – as with theoretical premises and anthropology, my films and installations seek to deconsecrate the ‘real’ of conventional documentary and agitate the viewer to seek out subjugated narratives in dominant media culture.” – KR